Skip to content
I was feeling a bit down today, and decided to cook a bit in an attempt to cheer myself up.  Not too much, mind you–cooking, I mean!  So right now I have yellow squash and onions simmering in a pot, “cooking down” with a little water, salt, pepper and a bit of butter.  I’ll let it cook until it’s pretty limp or I’m ready for dinner, whichever comes first.

The smell of squash and onions cooking always reminds me of my mother and summertime on the farm.  By this time of year we were inundated with squash and tomatoes, but there was never too much corn.  I dug out Mother’s Sunday school class cookbook, looking for recipe inspiration.   The cookbook was a fundraiser for the class; there are companies that still produce these today.  Mother wrote inside the front cover, “For Connie, 1990.”

The recipes are not “authentic southern cooking” at all.  These ladies were in their 60s and 70s then, and to them, fried chicken and homegrown vegetables were not “company” dishes.  So many of the recipes call for Campbell’s soup, Jello, cream cheese, cake mix, and other convenience foods.  I understand their point of view–when you were cooking three meals a day, every day, convenience was a wonderful thing!  And you know what?  It still is.

However, I was relieved to see that Mother’s contribution did not involve any of those, or even “oleo” as some of the recipes called it.  Here is her corn pudding recipe, which I suspect she got from my sister Glenda.  I don’t remember having this as a child, but it does sound good! 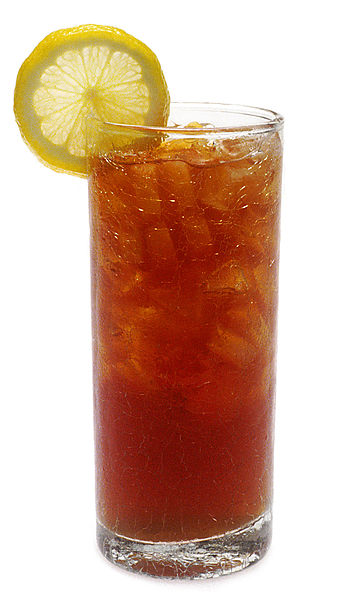 There was always a half-gallon glass jug of sweetened iced tea in our refrigerator, all year long, when I was growing up.  Daddy drank a huge glass every day at lunch and every night at dinner.  In the heat of summer he drank more than one.  I still have that old glass–it is a big amber-colored glass from some gas-station giveaway.

Mother made the tea fresh every day.  It was strong and sweet.  She put in two scoops of sugar with a red plastic scoop from the copper-colored sugar cannister on the kitchen counter.  Sometimes we had lemon wedges to squeeze in your glass, which was my favorite way to drink it (still is.)  Nothing was more refreshing on a hot, humid day.  Sitting at the dining table, air conditioner humming, with fried chicken, hot biscuits, creamed corn cooked in an iron skillet with bacon grease until it stuck, homegrown tomatoes, and iced tea–heaven!

Here is Mother’s methodology, which made sweet tea strong enough to stand up to ice cubes but never bitter.

Take 2 large or 4 regular tea bags (Lipton’s preferred.)  Put in a teapot.  Fill the pot with boiling water and let steep 10 minutes.  In a half-gallon glass jug or other non-reactive pitcher, put 1/2 to 1 cup sugar.  Pour in the hot tea when it finishes steeping, and stir to dissolve the sugar.  Then add tap water to fill the jug, stirring.

Ready to pour over ice or cool in the fridge.  Makes a half-gallon (2 quarts.)  You can serve with lemon wedges or fresh mint if you have it.  It should be a deep ruby color, even when poured over ice, and never bitter!

Like Loading...
This article in the New York Times style section today made me stop and think about the nature of my friendships and how they are changing.  http://www.nytimes.com/2012/07/15/fashion/the-challenge-of-making-friends-as-an-adult.html?ref=style

I thought it was wrong about some things, however.  Are your best friends throughout life the ones you make in high school and college?  I think that’s unlikely, unless you all stay in the same area, have the same educational and financial circumstances, and see each other often.  Like the article says, proximity and time to build a friendship are essential.  If you move away, things change.   It’s easier to make close friendships when you are in high school and college, but that doesn’t mean they will stand the test of time.

All of us have work friends, neighbor friends, friends we share interests with, and for people with families, your kids’ friends and their families.  How does that progress to become the friend you call when your mother dies, or that you can ask to feed the cat, or the friend you can wake up at 2 a.m., or the one who will take you home from the hospital?

My closest friends now began as acquaintances, work friends, or people I met because we shared an interest.   It took years in most cases before they became intimate friends.  We helped each other out and learned we could count on each other.  We learned we had fun together but that our relationships didn’t have to be only fun and games.

And what do you do when those relationships begin to change?  Some people get busier.  Others, while still working, are no longer working full-time and are away for weeks at a time on vacation or travel.  Some get richer, some get poorer, some are unemployed.  It’s difficult when you’re no longer all at the same level and able to afford the same things.

All I know to do is to try to share new experiences with good friends as well as remembering the past, and to try to stay flexible as circumstances change–and try not to be hurt if close friends become a little more distant.   And I keep an eye out for potential new friends at “entry level.”  You never know if you’ll find another BFF.  And life is too lonely without people who are more than just casual friends.

Looking at old photos sometimes prompts a memory or gives a blog topic.  This one says, “What were we thinking?” on so many different levels.  My sister Sherrie came to visit me in New York a few times in the ’90s.  We went to Broadway shows, standing in line at the TKTS booth in the cold and snow.  And we had dinner at  inexpensive Italian or French bistros–I miss Quatorze to this day.

We walked and walked and walked.  Things were a little grittier then.  Times Square still had a rough edge, and the High Line was just some rusted railroad track in Chelsea.  We visited museums.  Sherrie was teaching high school biology, chemistry and physics, so we made a pilgrimage to the Museum of Natural History, where this was taken.

The main thing that strikes me is, we both had perms.  Back then, that was a good “working girl” alternative if you didn’t have time for hot rollers every morning.  But what a terrible look!  It wasn’t flattering for anyone.  If you don’t believe me, just look at Meg Ryan’s hair in “When Harry Met Sally.”  That movie still gives me the shivers over how many of those hairstyles I went through!  And look at the glasses.  I think I was in a contest with myself to see how ugly I could be!

I always had fun when Sherrie came to visit.  She wanted to get up early and see as much as she could.  “We can sleep when we’re dead,” she would say.  So off we would go.  Sherrie wasn’t snobbish or over-sophisticated or picky.  She just wanted to see it all.  She’s my favorite tourist.

When I was a child, we had a small red brick house on a winding street in town lined with other nearly identical small red brick houses.  It only had two bedrooms, so my sister Sherrie and I shared a room, and my brother Gil slept in the attic.  It was built on a little hill, so the house had a walk-out basement garage, and a separate one-bedroom apartment next to the basement, which my parents rented out for a few years.

There were wooden stairs from the kitchen to the basement and garage.  Mother stored her canned vegetables and jams on shelves down there, while Daddy kept his tools and the lawnmower there.  This was where we went when a tornado warning went out and where Daddy considered building a bomb shelter during the Cuban missile crisis (but never did.)

Usually the garage door was kept shut unless Daddy was working on something in the back yard or the parking spaces–we had room enough for two or three cars to park.  Sometimes he worked on his old truck until dark in the summertime.  It always seemed to need something done to it to keep it running.

One summer night Mother and I were watching the black-and-white TV in the living room when something flew across the room and lodged itself in the drapes.  It was so fast  I almost felt it pass more than saw it.  Mother went to the door to the basement and found it cracked open.  “George!” she called.  “I think there’s a bat in the house!”

After a few minutes Daddy came up the stairs.  “That garage door must be open and it flew up here.  Do you want the broom?” Mother asked.  “Naw, I don’t need the broom,” he said.

He pulled on a pair of heavy leather work gloves and walked over to the drapes.  I could just see a small lump near the top of their folds.  In what seemed like one quick gesture, Daddy jerked the drapes back with one hand and grabbed the lump clinging to the inside with the other hand.

“You want to see, baby doll?” he said.  I looked in his gloved hand.  It was a bat.  He had picked off the drapes so quickly that its wings had not had a chance to unfold.  It was furry and grey, looking rather like a mouse.  I touched its warm stomach with a finger.  Then it opened it mouth and showed its tiny, needle-like teeth.

“Get that thing out of here, George,” Mother said.  “It could get loose and fly at our heads!”

Daddy chuckled.  “Don’t worry, old woman,” he said.  She opened the front door for him, and he turned the bat loose, flinging it up toward the sky.  It spread its leather wings instantly and disappeared into the night.

Mother made sure the garage door and the kitchen door were closed so we wouldn’t have any more visitors.   I was glad I got to see one up close.