five, 19 years younger than my oldest sister. So I grew up with a multitude of aunts and uncles, first cousins, second cousins, and even a couple of great-aunts in addition to my grandfather, when I was small.

I only have one aunt left out of all that multitude–27 aunts and uncles by blood or marriage when I was born (one had died young), and just one surviving now.  Aunt Agnes is 90 years old, born in 1924, Daddy’s youngest sister and 11 years younger than he was.

My sister Sherrie and I went to see her a few weeks ago when I made a quick visit back to Tennessee.  Aunt Agnes is still living on her own at her insistence, and with the assistance of her two children who take turns visiting every day and checking on her.  They wanted to get someone to live with her, but Aunt Agnes wouldn’t agree to it.  They had to take her car keys away a few years ago after she had a wreck and narrowly avoided a really bad accident.  She had a stroke a few months ago and recovered well, but she is unsteady on her feet now and has trouble with her short-term memory.

Aunt Agnes has always been a curious combination of unconventional and conventional.  She stayed in a painful marriage until her husband died, probably because divorce was shameful to her and her family.  Yet she worked at Fort Campbell as a civilian employee for many years, raising her family as a working mom.  Not a common thing in the ’50s and ’60s, even in the ’70s!  She’s always been devoted to her church and is a firm believer, but never to my knowledge cast aspersions at people in her family (like me, and some others I could name) who did not always live the way good Southern Baptists are supposed to live.  With her, family comes first, and her fondness for a relative goes a long way, even with a wayward niece like me.

Since the stroke she’s lost her appetite and has become quite thin and frail.  While Sherrie and I were there, Sherrie asked her if she wanted to have lunch.  Aunt Agnes had forgotten it was lunchtime.  She mentioned how she missed going to Captain D’s after church on Sunday, so I went through the drive-through and brought back that nasty, salty, fried fish for us all.  She ate maybe three bites.

I was surprised to get a card from her this week–I wasn’t sure if the stroke had affected her ability to write.  Inside was a perfectly clear and coherent note, and a $20 bill to pay for the lunch.  “Do not send the money back,” she wrote, and underlined it.  In her mind I’m still little Connie.  She’s the last one to remember me that way.

A few weeks ago I went back to Tennessee to visit my sister.  She lives with her husband on a 400-acre farm about an hour from Nashville, in a two-story house which his great-great- 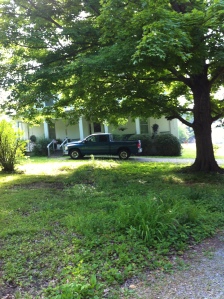 great (maybe more) grandparents on his mother’s side built somewhere in the 1800’s.  It’s been modernized considerably, but it still has painted brick walls and a large front porch with posts.  The windows are tall and narrow, as was the fashion back then.  I suppose the cost of glass had something to do with that, too.

When you’re inside the house, you could be in a suburb anywhere.  With air conditioners, ceiling fans, a dishwasher, a media room with recliners, satellite TV and internet, and cellphones, you’d never know you were in the country.   But sitting on the front porch brought it home to me.

The porch is wide and long, with comfortable furniture and hanging plants.  The yard and porch are shaded by several ancient trees, oaks and pecans.  The gravel driveway winds under the trees to the road, less than a quarter-mile away.  The distance is far enough that I couldn’t hear the sound of traffic, and there didn’t seem to be much other than the occasional tractor or farm truck.  My brother-in-law’s tractor shed is in a field next to the yard, but the fields they farm are across the road, so there was no sound of tractors or mechanical work.

Sitting on the front porch with my sister, feeling the breeze, the only sound was the rustle of summer leaves, green and supple.  We watched a rabbit hop slowly across the yard from one covered spot to another, wary of hawks or a neighbor dog.  A bobwhite called from the field. Later in the day I walked to the fence on one side and spotted a snake in the grass, curving its shiny black body to move swiftly in a straight line, intent on some mission under one of the oak trees.

Hearing the wind in the trees took me back to evenings on Aunt Lou and Uncle Floyd’s porch, listening to them talk with Mother and Daddy and tell stories.  That porch was on a wood-plank dogtrot house, not at all like my brother-in-law’s family mansion.  But the smell of cut grass, the birds calling and the wind in the trees will always take me back to childhood.