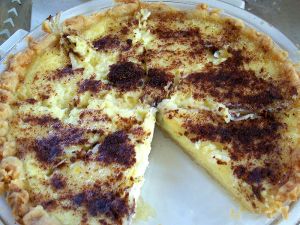 Aunt Geneva was my mother’s youngest sister.  She was feisty and funny.  In her young days, she pushed the boundaries of behavior in their country community before World War II.  Aunt Geneva smoked, and drank when she got the chance.  She and their brother, Uncle Jesse (known as Fatty because he was so thin), played harmonica and guitar and sang at parties, which was expressly forbidden by their hard-core Baptist church.   Mother told me it was permissible to sing, but not to play instruments at a “play-party.”  They also were not allowed to play cards except for Rook and Old Maid.

Aunt Geneva was the only one of the sisters to learn to drive a car, work outside the home, and marry someone outside of the community.  She continued to work at a plant that manufactured shoe soles while raising two boys.  I was always happy when she came down to visit Aunt Lou because Uncle Fatty would come over with his guitar, and they would play and sing the old songs, as well as “Little Brown Jug,” “Froggy Went A-Courtin'” and “In the Pines.”

Here is the recipe for Aunt Geneva’s coconut pie.  It is not a coconut cream pie, but a dense, sweet, custard pie, and very easy to make.

1 can coconut (or 1 cup flaked coconut)

Mix all ingredients.  Bake in unbaked pie shell at 350 degrees about 45 minutes.