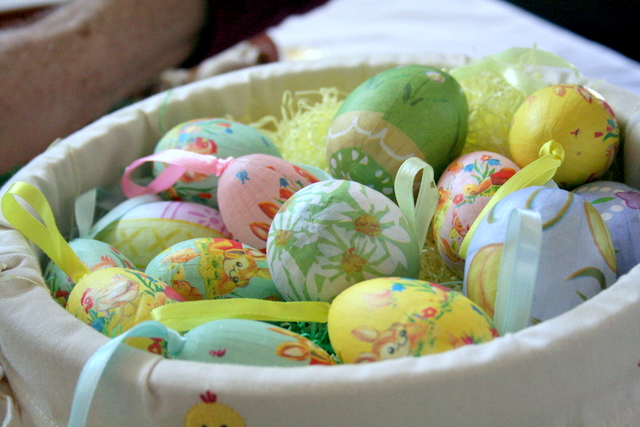 We’re feeling a little battered up here by our fourth nor’easter in three weeks.  It adds insult to injury that it’s snowing on the second day of spring.  At least the daffodils and tulips haven’t started to bloom yet, so they aren’t freezing or covered with snow.

This time of year I long for bright colors and warmth.  Too many months of black and white and gray make spring seem even further away.  Maybe it’s time to make an Easter basket and pretend the snow isn’t there.

My mother loved dyeing eggs, in the most vivid shades possible.  She’d dip them until they were deep purple or robin’s egg blue.  No pastels for her!  She also loved to shop for my Easter basket.  She knew I loved stuffed animals, so every year I got one along with the chocolate rabbit and the other candy in my basket.  She still made Easter baskets for me when I was in high school.

Mother was also a fan of the elaborate cakes featured in Good Housekeeping and other “women’s magazines” for holidays.  One year she tried to duplicate one for Easter that used tiered cake pans (like a wedding cake), decorated with coconut nests dyed green and jelly beans for Easter eggs.  I think the cake must have been too “short” (too much butter/shortening) because the layers crumbled as she iced it.  It ended up looking like a mountain with coconut nests clinging to the sides.

My nephew and I told her it was pretty and ate big slices when she cut it.  And it was delicious!  It just didn’t look like the magazine picture.

I wish you and yours the colors of Easter eggs, the sweetness of chocolate, and lots of spring flowers!

Snow days are not what they used to be for me, and for most adults, I think.  This winter has been extra-super-awful so far, all across the country for the most part.  It’s rare for businesses to shut down and for the governor to say, “Stay off the roads!”  So most of us have to try to get to work through the aftermath of snowstorms or spend hours in traffic (or on stalled trains) trying to get home.  I end up tired, cranky and sore from shoveling my car out of its parking spot.

When I was a child in Tennessee snow days were a rare treat.  Even an ice storm was welcome as long as the power didn’t stay off very long.  If we got one or two per winter we were thrilled.  Mother always said, “You won’t be so glad when you have to stay in school this summer,” but summer was far away.  A day out of the normal routine was well worth making up in May.

Once the snow stopped falling we usually managed to get out and visit my aunts and uncles on the neighboring farms.  Daddy’s truck could go most anywhere once he put the chains on.  He made sure everyone had groceries and would make runs to the little store at Stringtown, which never closed for anything (except the owner’s whim.)

Often Aunt Eunice would have us up for lunch, for her version of chili spaghetti, made in a crock pot.  Don’t ask!  It bore no resemblance to either dish, but it was tasty and warming on a cold day.  Mother and Daddy would then play Rook with Aunt Eunice and Uncle Tip, while I read a book.  Then we would slowly grind our way down the hill in low gear all the way home, the chains on the tires smacking the pavement.

If it was cold enough I would get to let our dog in the garage for the night, which was a huge thrill for him.  Normally he slept in his doghouse, or in warm weather he slept in a hollow he dug below my bedroom window.  He was never allowed in the house per se.  Mother thought having animals indoors was dirty and was impervious to pleading on this subject.

I remember getting up early the next day and listening to the radio to see if school would be out again.  I don’t think we ever got more than a couple of days in a row.  So I’d have to get bundled up and stand out at the bus stop in the dark, waiting for the sun to come up and the bus to come.  Back to normal again–with hopes for another snow day soon. 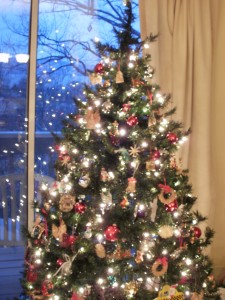 It’s a melancholy day here.  I can’t believe it’s snowing this early in December.  And it’s snow mixed with freezing rain, forecast to turn to black ice later tonight.  Too miserable to go out, but I’m restless inside.

When I was growing up in Tennessee snow was a rare occurance, and greeted with delight.  A snow day!  We got to stay home from school!  I remember one storm when I was small that left over a foot of snow, something that almost never happened.  My brother went out sled riding with his friends and got run over by one of the boys.  The sled runner must have been sharp because it sliced his knee open and he had to have stitches.

Ice storms were more common.  They were actually frightening because the power could go out in addition to the roads getting slick.  Once when I was home from college there was a massive ice storm and the power was out for a few days.  Mother cooked on the wood-burning stove in the garage, and Daddy hauled water up from the well since the pump couldn’t work without electricity.  It was so cold that Mother even let my German shepherd come in the garage with us.  He was rarely allowed to come inside since Mother thought having pets in the house was low-class and dirty.  Poor Chico was so happy!  He always wanted to be an indoor pet, despite his size.

In recent years we’ve had ice storms here, which used to be uncommon.  One of my friends calls it “global weirding,” to explain the more violent weather we seem to get.  Big parts of Connecticut were without power for weeks due to tree branches taking down power lines.

So I guess a relatively mild snow and ice event is nothing to complain about.  Still, I feel grumpy and blue.  So I’ll post a picture of a Christmas tree and go watch some cat videos.  Light activities for dark days!  Any hints for cheering yourself up in the winter weather are welcome!

I’m the youngest of five children, and there are almost 20 years between my oldest sister and me.  Daddy turned 40 years old not long after I was born.  That’s not unusual today, but in my parents’ day they were considered old enough to be grandparents!   There are seven years between the next-to-youngest and me, so I’m sure Mother and Daddy thought their family was done long before I came along.

You’d think they would not have been pleased, but from all accounts they were thrilled.  Even when I was a teenager, Daddy still spent time with me and did things with me, difficult as that was for him with a girl who wasn’t athletic, and at a time when we didn’t have money to spare for movies or dinners out.

One inspiration he had falls squarely into the “don’t try this at home” category.  It rarely snowed more than a dusting in our part of Tennessee–ice storms were more prevalent.  So any snow was a huge treat and a special occasion.  One winter we got a few inches of snow, and school was closed.  I had a sled, but the runners kept getting bogged down in the wet snow.  Then Daddy had his big idea.  He took a discarded car hood from my uncle’s garage, and chained it upside-down to the back of his tractor.  “Get on the hood, baby doll, and hold on!” he said.

We spent a good part of the afternoon going up and down the slushy, ice-slick road with the tractor and car hood.  Looking back on it now, I wonder why the hood didn’t slide into the tractor’s rear wheels, and how on earth I kept from falling off.  But I had no problems at the time, and it was exhilirating to ride and slide in the cold.

Finally we went home, and Daddy unchained the hood.  My boy cousins next door had been watching enviously.  “Uncle George, could we use that car hood?” Dale asked.  Daddy said they could.  Dale and Don launched themselves down a hill, completely unable to steer the hood.  They hit a tree and Don broke his arm.  Oops!  Like I said, don’t try this at home!