When I was a child in Tennessee, summer started by Memorial Day and ended around the third week of August when we went back to school.  My elementary school was not air conditioned, and we sweltered in class until at least the middle of September.  In those bad 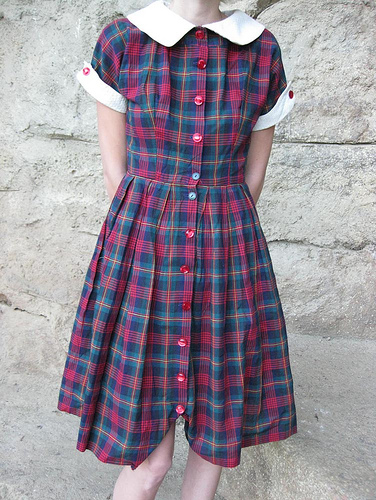 old days girls were not allowed to wear pants or shorts to school.  Some clever retailer invented “dark cotton” dresses, knee-length dresses in plaids and fall colors but made of lightweight cotton so you didn’t faint in the heat.  Those dresses did duty until well into October with a light sweater if needed.  Often it wasn’t, and even Halloween was still warm weather.  Patent leather shoes and white anklets completed a girl’s school wardrobe, which we went shopping for in the dog days of August.

Summer here doesn’t seem to end until mid-September.  The kids are back to school after Labor Day, but the outdoor grill at the boat club on the Hudson hangs on for a few more weekends, weather permitting.  Yet all the free outdoor concerts and Hudson Valley Shakespeare Festival are done by Labor Day weekend.  And I can see the days getting shorter as we move toward the autumnal equinox.

Where did the summer go?  Mine seems shorter than usual to me because I started a new job and did not take a vacation.  That said, I did do some of my favorite summer things:  went to the Jazz Forum Arts concerts at Lyndhurst a few times (two more opportunities, weather permitting); had picnics at those concerts with friends, and a lavish French-style picnic with a group of gourmet friends; went to Hudson Valley Shakespeare twice; and saw Justin Peck’s Dance Americana at Kykuit, a truly magical evening.  I also saw a dance performance at the Lincoln Center Festival with a new friend from the new job.  And there were a few dinners and get-togethers with friends, as well as time to collapse on the couch and read a good book (ok, not much time for that!)

I’m going to meet up with my sisters on Labor Day weekend, so the summer will end with a family note.  I’m determined to enjoy these last few weeks, especially when the heat wave breaks.  I hope you are all enjoying the summer and will have a smooth transition into the fall.

My friend Ed observed the other day that the two forces which made the modern South possible are integration and air conditioning.  The more I think about that statement, the truer it becomes.  We obviously still have huge issues with racial tensions throughout this country–the sad case of Trayvon Martin makes that only too clear.  Yet, as my African-American friend has told me before, things are a whole lot better than they were 50 years ago.  I hope we can get still further down that road.

On the subject of air conditioning, the heat and humidity of this summer has led me to remember what it was like in the summer in Tennessee.  When I was a small child we only had a big unit air conditioner in the dining room window, which was supposed to cool the entire house.  It was not nearly big enough, so we had circulating fans on the floor in our bedrooms.  The rhythmic hum of the fan was as good as white noise to help me fall asleep, while the movement of air washing over me made me feel cooler.

On the worst nights, when the air conditioner just couldn’t cool enough and the air was thick with humidity, Daddy would get out the car and we would go for a ride after dark with the windows rolled down.  The sticky air didn’t help much but the breeze coming through the windows was better.

We spent one summer in an old, dilapidated house without enough wiring for air conditioners while the house on the farm was being built.  It had thick walls which did keep it from heating up as much as it would have otherwise.  But many a night I laid in bed, sheets thrown off, sweating even with a fan pointed at me from the floor.

Air conditioning in modern office buildings made it possible for industry to move to the South, which made city life and civilization preferable to farming for many people, and brought diverse populations to the area.  Air conditioning in homes made it much more comfortable to live there.  It was a big change which I am grateful for, even here in New York–the third heat wave of the summer began yesterday!

When I think of that time, it’s mainly the heat I remember, and the air so thick.  The woods  in back of the house were lush and green, but the pasture in front was beginning to turn brown from the August heat.  Even as the sun set over the ridge, smoldering red, it didn’t get much cooler.  The haze of heat dissolved from the fields, but the air was still with moisture and hard to breathe in.

Then it was dark, and it was darker than it has ever been again.  Dark as Egypt, my mother would say.  No street lights, no security light, the nearest house a half mile away across the fields and shrouded in trees.  Coming down the gravel driveway to the raw, red brick house and turning off the car lights, you saw streaks and spots that weren’t there, like the lights inside your eyelids.

Then you and the boy stumbled across the yard in the dark and sat in the swing under the big oak tree.  Slowly you could see again, first the dark bulk of the house, and then the stars.  There were more stars then, thick brushstrokes of them across the sky.  You could actually see the arm of the Milky Way, distant pinpoints in the dark.

A car would pass on the road, lonely and preoccupied.  There was the hum of the air conditioner in the window of the house, the high, monotonous peeping of tree frogs, the quiet whuffling of cows, settled down to sleep by the pasture fence.  A bird rustled in the tree above your head, shifting its perch. The swing creaked and its chains jingled when the boy suddenly stopped its motion.

Then the moon rose above the ridge, drowning the stars, silvering the ground fog smoking in the hollow.  You could almost count the craters on the moon, it was so bright and unnaturally big.  And you were not afraid of anything, not anything.

Suddenly the porch light flicked on and off.  The boy decided it was time to go.  So you went in the house, resentful, not knowing that nothing would ever be the same again.