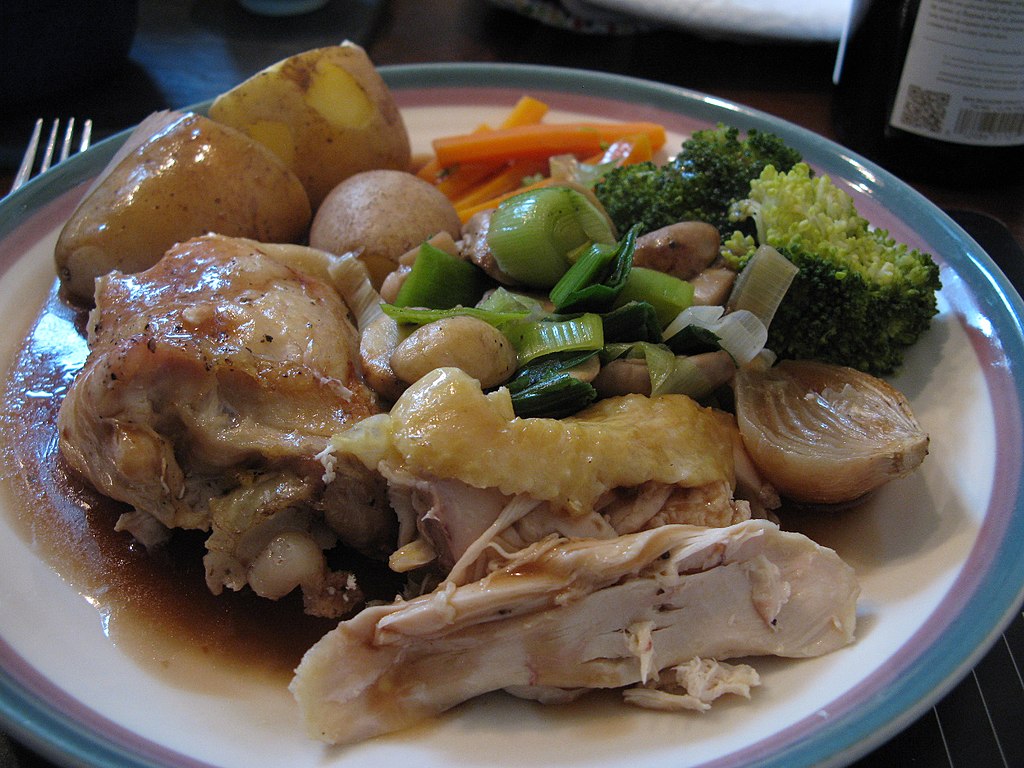 When I was in college in the late ’70s, one of my friends whose family lived in the town would bribe me to go to his Baptist church’s Sunday school for young adults by promising Sunday dinner at his grandmother’s house.  I wasn’t much of a hard party-er on Saturday nights, so it was no hardship to get up for Sunday school.  And it was worth it for the Sunday dinner.

Ron’s grandmother, Dodi, was a tiny woman somewhere in her late seventies.  She wore thick glasses and was hard of hearing.  She lived alone in a small house in a neighborhood that was on its way down, but still had a number of working-class people living there in rows of identical houses.  Dodi spent her entire week shopping for and preparing Sunday dinner for her family and whatever friends they brought along.  Usually the crowd was at least six people, and sometimes as many as eight or ten.

Dodi’s income was small, so she clipped coupons and watched the grocery store circulars in the paper, and made her plans.  She didn’t drive.  Sometimes one of her grandchildren would take her shopping, but often she took the bus to the grocery store and back.

After Sunday school and church we would go over to her house around noon for dinner.  Her meals always featured several dishes of classic Southern food like fried chicken and mashed potatoes, green beans, biscuits, or ham, or meatloaf, and casseroles from Good Housekeeping or recipes in the newspaper.  Sometimes there was a Jello salad, a favorite treat for women of her generation.  There was always pie or cake for dessert.  It was plain food but always delicious to me.  As I recall, we served ourselves buffet-style and ate in the kitchen if the group was smaller.  I remember a linoleum floor and white metal cabinets.

Her daughter or one of the grandchildren invariably complained about something she’d cooked.  They made fun of her because she couldn’t hear, and because all she talked about was the shopping she’d done and how much she’d saved with her coupons and bargain-hunting.  She just laughed at what they said.  I think it hurt my feelings more than it hurt hers, but maybe she just couldn’t hear what they were saying.

I wondered, why does she go to so much trouble?  She was old and she had to be tired from trudging back and forth with groceries and doing all that cooking.  It’s taken me years to understand why.  She wanted to see her family, pure and simple, and making a meal was a sure way to get them to come.  Cooking for her was how she showed her love.  Planning and making the meal every week gave her something to do and something to look forward to.  It was an event she could count on.

Four or five years later she developed dementia, and the Sunday dinners went away, never to come back.  No one else in the family stepped up to carry them on, except for Thanksgiving and Christmas.

Like Loading...
Every once in a while I feel a little lost in space here in New York.  This is my home, and I love it, but my Tennesee upbringing tends to come out at inconvenient times.  I was talking to a woman who is a chaplain on Friday, and she commented on the difficulty of working with a colleague of another religion.  “I think he doesn’t like me because I’m a woman, but I just keep being nice to him,” she said.

I replied, “Heaping coals of fire on his head!”  She looked at me like I had lost my mind, and said, “No, no, killing with kindness.”  I agreed, somewhat abashed.  Then I came home and looked it up in the Bible.  Sure enough, Romans 12:20-21 says, “Therefore if thine enemy hunger, feed him; if he thirst, give him drink; for in so doing thou shalt heap coals of fire on his head.”

I’m certainly no Bible scholar but I was brought up Southern Baptist in Tennessee some years ago, and Bible study was part of my youth.  We memorized verses, and many, many verses were expressions that my parents, aunts and uncles used.

“The ox is in the ditch” was one that probably seems obscure to most people.  It comes from Jesus’ parable of the Good Samaritan.  In his story, the religious teachers passed by an injured man who was lying by the road because it was the Sabbath, and they were forbidden by Jewish law to work on the Sabbath.  The Samaritan stopped and helped him.  Jesus seems to say in this story that human need is greater than religious law.  And he says, “Which of you will have an ass or an ox fallen into a pit on the Sabbath day, and will not pull him out?”  So in the South it came to mean, an unavoidable job that has to be done, even on a Sunday, or an excuse to do something on a Sunday.

Sword drills were another odd thing we did in Sunday school when I was a teenager.  A sword drill was a find-the-Bible-verse contest.  I was a keen competitor (I’ve always been a Type A, I’m sorry to say).  Basically you had to know the order of the books of the Bible and have fast page-flipping skills.  The competitors would stand in a circle so you couldn’t see each other’s Bibles.  The Sunday School teacher would say the book, chapter, and verse, such as “2nd Samuel, 12:1.”  The first person to find it was the winner.  One lived in dread of the obscure books of the Old Testament.  I’m not even sure how to spell Habakkuh now (woops!  just looked it up, Habakkuk).

Putting aside any religious effect on me (probably less than my parents hoped), the Bible study enriched my life with stories, poetry, and quotes I would find in literature as an adult, and expressions that added salt to the blandness of speech.  Robbing Peter to pay Paul, anyone?